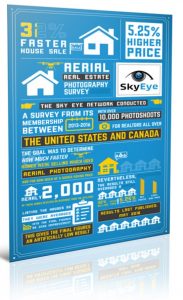 If you’re interested in joining the Sky Eye Network, you can feel free to contact us for additional information.

The Sky Eye Network conducted a survey from its membership between 2013-2016 with over 10,000 photoshoots for Realtors all over the United States and Canada.

The goal was to determine how much faster homes were selling which used Aerial photography, and for how much of a higher asking price.